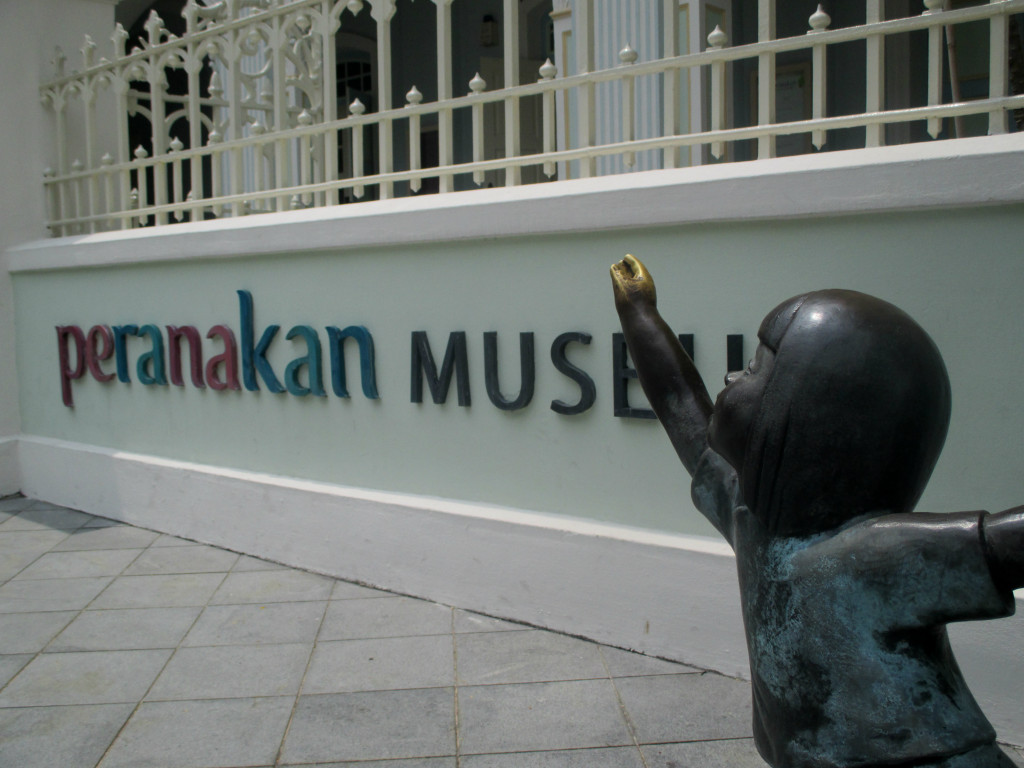 Beginning at Coleman Street and ending a short distance away at the junction of Stamford Road and Waterloo Street, Armenian Street is just a squib of a lane in the city’s civic district. But don’t let its modest length fool you; for anyone looking for a delectable dose of art in all its forms, Armenian Street is a place not to be missed. Nestled in the rows of refurbished art deco shophouses from the 1930s to 1950s are historic paintings, modern sculptures, dramatic performances, film screenings and sophisticated architecture.

If you’re intrigued by the patterns and shapes of Singapore’s history, the Peranakan Museum is home to a rich collection of porcelain Nonyaware pieces in every color, intricate beadwork purses, gilded teakwood cabinets and armchairs, protective amulets with bells and tiger claws, an elaborate wedding portmanteau, and even a selection of old telephones that connect you to conversations from another era. The museum is housed in the Old Tao Nan School building, an elegant relic from 1910 that features arched verandahs, high ceilings and sweeping symmetrical staircases fashionable in Europe at the time. The cool rooms and quiet galleries are a serene space to peruse on a hot afternoon.

If vibrant, live performances are more your style, I suggest you hit The Substation. As its name suggests, the building was previously a power sub-station until 1990, when it was transformed into the nation’s first independent modern arts centre by playwright and director Kuo Pao Kun, who is considered the pioneer of Singapore theatre. Today, The Substation continues to be known as an incubator for emerging or experimenting artists, who fill the black box theatre, gallery, dance studio, classrooms, and garden with everything from short films to one-act plays to multi-ethnic love letters.

For those craving a secluded moment with contemporary artwork, both 11.12 Gallery and Mulan Gallery feature unique pieces by an array of artists. However, it is the grand four-story Art Plural Gallery that stands capacious and proud as one of the focal points of not only Armenian Street, but of the Singapore art community. Back in 2008, Carole and Frédéric de Senarclens predicted that Singapore was poised to become a hub for the Asian art world and since opening Art Plural Gallery with a splash in 2011, they have only been proven right. The couple wanted to be in the historical and cultural district, so it only made sense that Armenian Street would become their carefully chosen base on the island. In the midst of Singapore’s heritage and museums, Art Plural Gallery nevertheless mimics the country’s pivot towards the international and Frédéric travels the globe to find promising artists to feature.

Recently, the gallery collaborated with Audemars Piguet and Gatehouse Publishing to launch a book that explores and celebrates the growing presence of globalization in contemporary art. Art historian and author Michael Peppiatt declares in the book’s introduction: “The artists of today are constantly on the move…This conjunction has given rise to a diversity hitherto unknown in any medium at any previous moment in the world. And the key word here is world because, for all the indications that national or local traditions remain influential, there can be no doubt that we have reached a moment when we can talk convincingly in terms of world art.”

Few countries could compete with Singapore as a crossroads and flagship for artists who not only reflect strains of globalization in their work but who have also themselves gained international recognition. When I suggested that galleries such as Art Plural were integral to this island’s burgeoning reputation as a multi-ethnic art center, Carole insisted: “We’re just part of the momentum. We couldn’t exist without the museums, without even the Peranakan Museum, around us in this neighborhood. It all combines together to make a really interesting artistic hub.”

“Armenian Street is at the center of the future arts district,” Frédéric added confidently. “I think it’s one of the best locations in Singapore.”