Published on September 1, 2014 in the Singapore American Newspaper:

It’s no secret that you can tour Singapore on your stomach. New flavors and exciting spices can be found in almost every corner. But sometimes, no matter how delicious the nasi lemak or how tempting the char kway teow, you just want something unhealthy and American for dinner. And if you’re going to indulge in proper, gooey mac’n’cheese, then you may as well explore the city while you’re at it. Here’s my roadmap for discovering Singapore’s neighborhoods while feasting on this all-American comfort food.

OverEasy at One Fullerton. OverEasy might just be the perfect place for a person’s first night in Singapore. If you’re still woozy from the jetlag and your stomach isn’t up for chili crab yet, zip down to One Fullerton for American diner food. After making acquaintances with the famous Merlion, you can tuck into OverEasy’s Good Old-Fashioned Mac & Cheese while being dazzled by the Marina Bay Sands’ nightly laser show. However, I’m a sucker for their Truffled Mac & Cheese with Wild Mushrooms. You can also indulge in other American classics like homemade lemonade and beef sliders. Afterwards, wander along the bay front and enjoy the breeze. 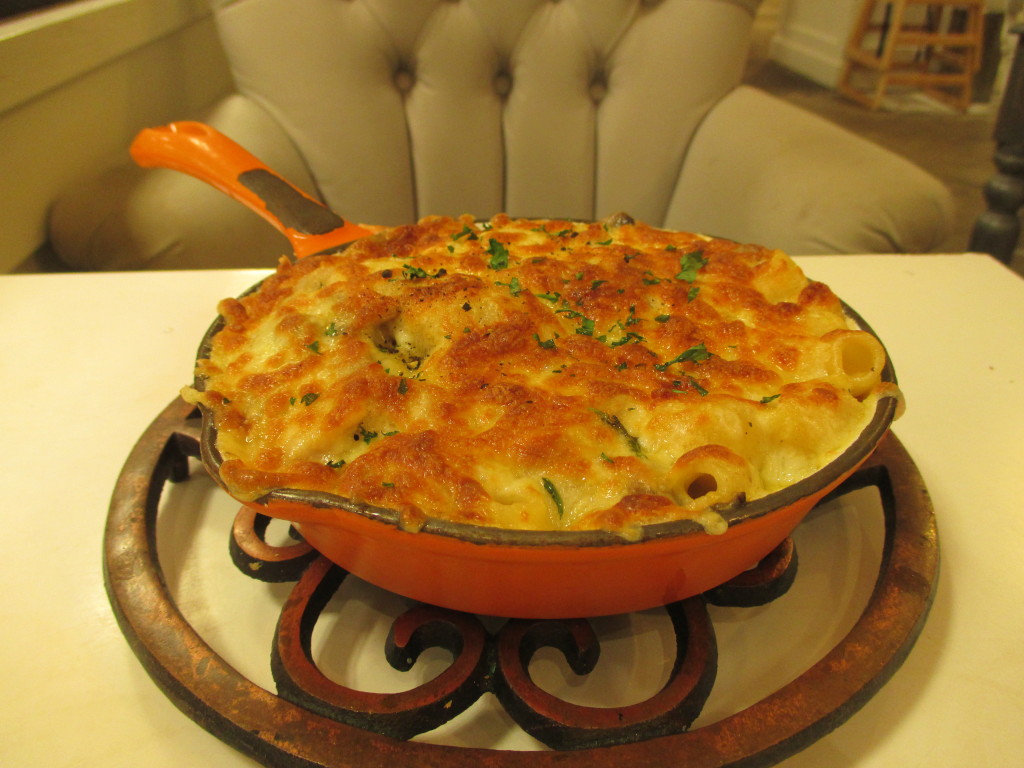 Pique Nique at Ngee Ann City, Orchard. Any introductory tour of Singapore would be remiss without a thorough exploration of Orchard, which is like a combination of Times Square and Fifth Avenue. It’s a shopper’s paradise during the day (if your wallet can stand it) and it’s a brightly-lit spectacle at night. Whenever you find your energy flagging, stop by Pique Nique for a hot serving of their Roasted Chicken and Mushroom Mac & Cheese. Located in the basement of the elegant Takashimaya department store, this underrated restaurant is a perfect rest stop for tired shoppers hungry for filling, perfectly-seasoned comfort food (including whoopie pies and five types of fries).

Brewerkz, Clarke Quay. Another touchstone in the expat nightlife of Singapore, this restaurant and microbrewery has been in business since 1997. And since nothing goes better with handcrafted beer than quality bar food, that’s just what Brewerkz delivers. Their mac’n’cheese is true to the soul of the dish (no vegetables here!) and has that perfect texture: crispy on top, chewy in the middle. Clarke Quay has a lot of Western restaurants but few have been created by Americans for Americans. Nevertheless, the riverside is a thriving hub of activity and once you’ve had your fill of mac’n’cheese, you can stroll down to both Boat Quay and Robertson Quay.

Latteria Mozzarella, Duxton Hill. One of the unfortunate truths for Westerners who have moved to Singapore is that quality cheese is sometimes hard-to-find, expensive, or both. But Latteria Mozzarella is a godsend to any cheese-lovers searching for a classy evening out. Even their mac’n’cheese has been elegantly upgraded by its being served in a hollowed pumpkin. The gourd isn’t just for show though. The rich lining of pumpkin adds an unexpected oomph to the mac’n’cheese without overwhelming those homey flavors you love so much. The Duxton Hill area is always bubbling with nightlife and is a picturesque neighborhood that features Singapore’s classic shophouses.

28 HongKong Street, Chinatown. One of the city’s hidden gems, 28HKS is a glamorous speakeasy known for its obscure location and exemplary cocktails. It’s been lauded in TimeOut Singapore and the Wall Street Journal but neither article mentioned one of the bar’s biggest attractions for me: the mac’n’cheese balls. Crispy on the outside, hot and gooey on the inside, these mac’n’cheese balls are the perfect intersection of luxury and familiarity. There’s no fancier way to eat this beloved dish in Singapore and as 28HKS is tucked right next to Chinatown, it’s a perfect beginning or end to a night of exploring one of the city’s most historical districts.

Whether you’re looking for classic mac’n’cheese or for a twist on this old favorite, Singapore obliges. Everyone has his or her own way of settling in to a new home, so who’s to say you can’t explore this dynamic Asian city via comfort food?