Super crazy excited that my short story “Sentimental Cartography” is being featured by Ohio State’s literary magazine The Journal. I had such an amazing time working with the editors, whose feedback was invaluable AND they even nominated my story for a Pushcart Prize! 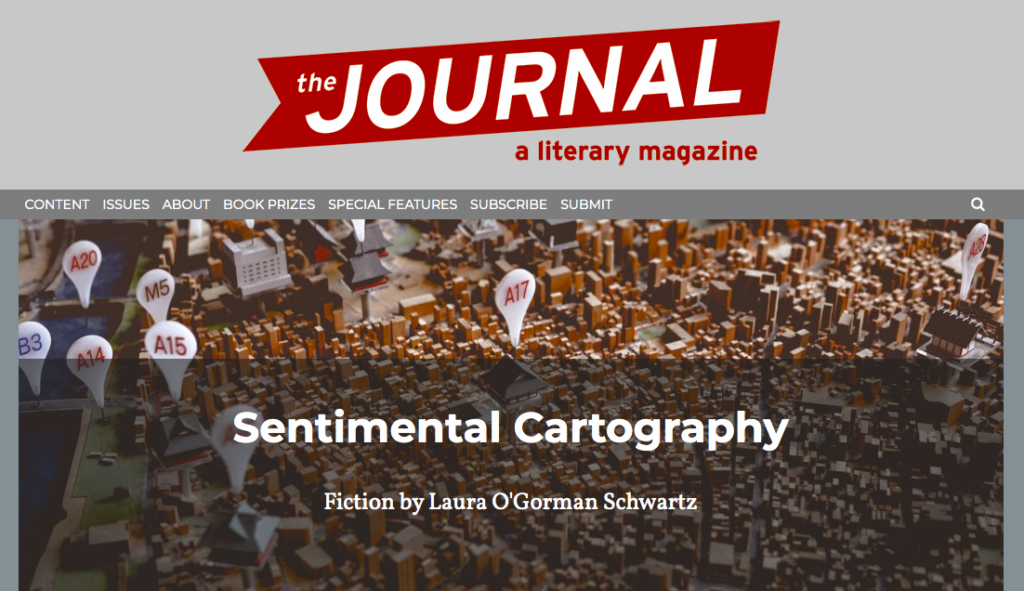 Although Madeleine de Scudéry mapped Tenderness in the 17th century, it wasn’t until the 1840s that explorers seriously attempted to map a woman’s heart.

Atlases were being updated monthly in those days. There were redrawn maps of the earth. The sea. Stars. Bones. The lungs of the nation expanded, ribs cracking, Mexico elbowed aside. Texas shed its republic and was slotted into the role of state. Florida, Iowa and Wisconsin were also christened. California glimmered in the far west, Antarctica in the south, dreamlands of gold or snow. The King of Hawai’i and the electrical telegraph both found God. But most startling was Neptune’s leap from a star to a planet.

Perhaps it was that – a light thought to be fixed in place revealed as mobile, unreliable, migrant – that spurred men to reexamine their mothers and mistresses, wives and daughters, these frequently observed yet unmapped territories. One’s garden was always the last to be considered explorable, the steps too familiar, the paths too trodden. But sudden mud could grip one’s ankles. Beloved perennials could evaporate. One’s own memory could stumble. With trains and telegraphy rushing to knit the world together, it was becoming clear that ostensibly known spheres, Womanhood in particular, could not remain unclassified.

De Scudéry’s Carte de Tendre, with its winding, amorous French routes, was denounced as an inadequate guide, primarily because it was nestled in a novel that spanned ten volumes and no one had time for that now that words flew on electricity. The official reason for the censure, however, was that de Scudéry’s extensive education would have weighed down her expeditions, and as she was female, she would have been biased in favor of the locals. Besides, she never married. Another attempt at surveying the heart came seventy-six years after de Scudéry’s death. Johann Gottlob Immanuel Breitkopf detailed a map of The Empire of Love, but as this Reich included the Land of Lust, Swamp of Profanity and Bachelor Country, it was presumed to chart only a man’s heart.

Breitkopf’s bold efficiency and musical typeface made him the personal hero of Joseph Husson, a clerk in the typography department of a Bostonian printing press profiting nicely off the constant updates of the 1840s. A snail of a man who flinched into retreat under a steady gaze, he dabbled in drawing maps, though would remain an amateur for his entire life. The smell of linseed oil clung to his nearly-fashionable clothes. When the word cartographie crossed the Atlantic, dropping the original ending, as immigrants do, Husson remodeled every conversation into an opportunity to deploy this new word. Predictably, he became a plague on social events. If he became the first to successfully map a woman’s heart, he bet they wouldn’t be so quick to snicker.

Husson prepared the necessary supplies at the office, but the only woman he is reported to have kept regular company with was his elder sister, Marcy, who had a habit of resting her cheek into her left fingertips whenever she gazed into a novel. This always gave the impression that she was reading something shocking. It was an old-fashioned gesture and didn’t suit her at all, but that was the picture that appeared in the papers. She’d made the evening post because of her spectacular separation from a recently bankrupted railroad tycoon, who was also a well-known crossdresser. The crossdressing wasn’t the reason she left him, though she had to claim it was, since the divorce wouldn’t have been granted if they uncovered her collusion. Unmoored, she commandeered a bed in her flustered brother’s apartment around the time he embarked on his quest to chart a woman’s heart. Historians have debated the extent of her influence on his expedition. A percentage of his firsthand observations may actually be hers.

The length of Husson’s mission remains vague, but the result was mapped in oil and pigment and gum and salt and acid wash. Terrain was etched into soft stone and wet lithographs were birthed. The heart was affixed squirming onto thick paper, painted by hand and sold in batches…